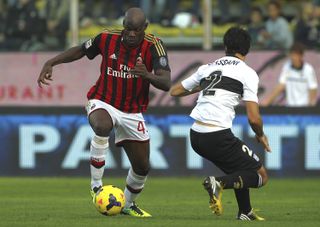 A recent run of bad form has seen speculation about the Italian striker's future mount, with his agent Mino Raiola suggesting he could be reunited with former manager Jose Mourinho in west London.

But Allegri was defiant as he spoke at a news conference on Tuesday, claiming the forward - who signed from Manchester City in January - was not going anywhere.

"I have absolutely no fear of losing Balotelli in January," he said.

"He is a Milan player who is now living in a time when he's not playing well, but it can happen."

Balotelli previously played under Mourinho at Milan's city rivals Inter, and Raiola had earlier suggested his client could be tempted to re-join Mourinho at Stamford Bridge.

"Balotelli and Mourinho could be reunited because they know each other and they didn't leave each other with hate," he told Italia 1.

"They have remained in contact and there is mutual respect.

"It could happen (a move to Chelsea) but (Milan vice-president) Adriano Galliani obviously doesn't want it to."