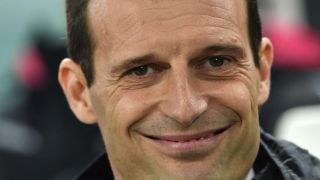 Massimiliano Allegri says the job is still not done for Juventus despite watching his side demolish Inter 3-0 in the Coppa Italia semi-final first leg on Wednesday.

Alvaro Morata struck twice – the Spaniard's first goals since October 4 – and Paulo Dybala came off the bench to add a third for the holders as Inter were outplayed in Turin.

To compound the visitors' woes, Jeison Murillo was sent off for a second bookable offence late on.

And despite the Nerazzurri now needing a remarkable comeback in the second leg at San Siro on March 1 to prevent Juve from reaching the final, Allegri is still demanding improvement from his players.

"Right now Juventus is fine, the guys played a good match," he said.

"It was not easy; we were good in defence but we have to improve in the build-up phase.

"I would say that at this time we are taking away great satisfaction [from the performance] but we still have much to do.

"We still [have to get to] the Coppa Italia final and we are second in the league, not first."

Morata meanwhile expressed his relief at ending a long barren run in front of goal.

"It was an important night for me," he said. "Thanks to all my team-mates for their encouragement and support.

"I am now a completely different player than yesterday. A striker lives [for] goal, now I expect to continue like this."