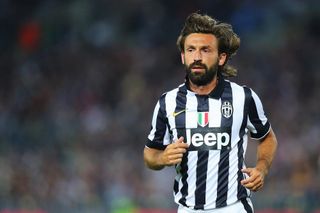 The reigning Serie A champions had already registered victories over representative sides from the Indonesian and Australian leagues in recent weeks, and they ran out comfortable winners at the Stadium of Singapore.

Despite the relatively weak opposition, Allegri named a strong Juve side with Andrea Pirlo, Paul Pogba and Fernando Llorente all starting.

Pirlo and Pogba enjoyed particularly productive games, the former netting twice from set-pieces in the first half while the France international added a fine individual effort shortly after the break.

Sebastian Giovinco added a fourth in the 54th minute with a sharp volley from Pirlo's assist before substitute Kwadwo Asamoah made it five as Juventus cruised to victory.

The hosts rarely threatened Juve's goal as the gap in quality proved to be too much to overcome, with the visitors receiving a confidence boost ahead of their Serie A opener at Chievo in two weeks' time.

Juve almost took the lead inside the opening five minutes as they struck the woodwork twice in quick succession.

Pogba's header was brilliantly tipped onto the post by Hassan Sunny, before Leonardo Bonucci nodded the rebounded against the crossbar.

Sunny was called into action again in the ninth minute as he was forced into a save by Giovinco's stinging volley.

The goalkeeper excelled himself once again shortly afterwards as he flung himself to his left to keep out a trademark dipping free-kick from Pirlo.

He could do little about Juve's opener in the 17th minute, however, as Pirlo cleverly rolled another set-piece underneath the jumping wall and into the bottom left-hand corner from 20 yards.

Giovinco had a goal ruled out for offside as Juve continued to dominate and their lead was doubled in the 44th minute when Pirlo calmly dispatched a spot-kick after Roberto Pereyra was hauled down inside the area by Shakir Hamzah.

The visitors picked up where they left off at the start of the second half as Pogba beat two men on the corner of the box before cutting inside on his right foot and curling a low finish beyond Sunny.

Juve ought to have extended their lead five minutes later when good work between Pogba and Giovinco teed up Pereyra, but the Argentinian's header from five yards was superbly kept out by a sprawling Sunny.

Respite was brief for the hosts, though, as Pirlo chipped the resulting corner to Giovinco, and his thumping first-time volley from 25 yards flashed past the unsighted keeper.

Asamoah rounded off the scoring 19 minutes from time, crashing the ball home from 12 yards after the hosts failed to deal with a low cross into the area.