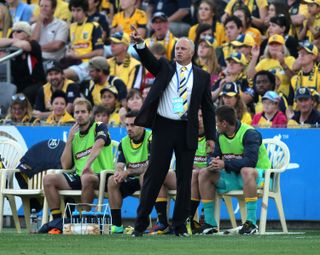 Arnold, Central Coast's head coach, is one of three front-runners to take over as Australia's national team boss, along with the favourite - Melbourne Victory's Ange Postecoglou - and Tony Popovic of Western Sydney Wanderers.

Speaking to the media on Friday, Aloisi said he hopes the potential departure of their title-winning tactician could put the Mariners at a psychological disadvantage on Saturday at AAMI Park.

"I feel sorry for the players playing under them, because they don't know if their coach is going to stay or go," Aloisi said of the squads at Victory, Western Sydney and Central Coast.

"Hopefully it distracts Mariners a little bit, if they think Arnie might be going."

The Heart coach backed any of the three main candidates for Australia's top job to succeed if given the opportunity, and believes their prominence in the reckoning to replace Holger Osieck reflects well on the state of the A-League.

"I think any of the three could do a good job," Aloisi said.

Aloisi also cautioned against an overseas appointment, despite having played under 2006 World Cup hero Guus Hiddink.

"It is a big concern," the former Australia international said.

"Because if they get an overseas coach I don't know how well they know our players, our Aussie spirit. You have to play to the players' strengths. A foreign coach has got a tough job on his hands if he does come in."

If, as expected, Postecoglou accepts the call from Football Federation of Australia to take over the Socceroos, Victory will be on the hunt for a replacement.

But Aloisi was adamant he has no interest in crossing over to navy blue and white.

"Not at all," he said, when asked if an approach from Victory would make him consider his position.

"Melbourne Heart is my club. I've got a contract here, I've been here from day one. It doesn't interest me who they get, Victory. I'm just focused on doing well for Melbourne Heart. And we will do well."