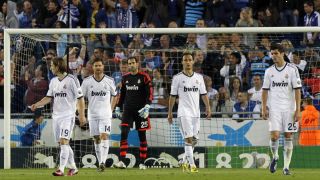 Alvaro Morata is looking forward to meeting Xabi Alonso again when Juventus take on Bayern Munich in the Champions League round of 16 as he has fond memories of his compatriot following their time together at Real Madrid.

The 23-year-old made his debut at Madrid in December 2010, but was unable to secure regular first-team action in the years to come due to the stiff competition for places.

He has admitted the lack of opportunities made things difficult for him, but Alonso was always there to lend support, before Morata eventually left Madrid for Juve in 2014.

"Xabi Alonso was one of the few who looked after me and cared about me," Morata told Sport Bild.

"He always kept an eye out for the younger players in the first team.

"In return, I brought the older players their food during dinners. It's a tradition. Xabi never had to worry about getting hungry when I was his waiter...

"I did not feel free in my mind at Real Madrid. I did not see a chance to establish myself as one of our main attackers.

"I got a lot of offers, but Juventus visited me at home and made a good offer. All of a sudden, the mental strength was back. I just wanted a chance."