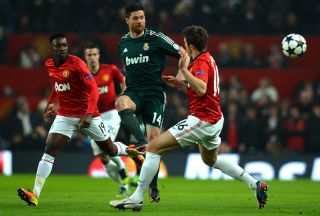 The Spain international returned to the first-team fold as a second-half substitute in Real's 7-3 La Liga win over Sevilla after a spell of over five months on the sidelines with foot and groin problems.

Alonso's current contract at Real expires at the end of the season and, with discussions yet to begin over an extension, speculation has mounted that the former Liverpool man could be on his way out of the Bernabeu.

Former Real boss Jose Mourinho is thought to be keen on reuniting with the 31-year-old at Chelsea, while Serie A champions Juventus are also reported to be showing interest.

But Alonso - who joined Real in 2009 - has revealed that while he did not want to discuss his future while out injured, he is now eager to sit down with manager Carlo Ancelotti and the club’s hierarchy with a view to negotiating a new deal.

"Now is the moment to begin to talk to the club about my future," he told Canal Plus.

"While I was not fit I did not feel up to talking. I have good communication with the club."

Alonso received a warm reception from the Bernabeu faithful when he was brought on for Asier Illarramendi in the 64th minute on Wednesday.

And Gareth Bale, who marked his first home Liga start for Real with two goals against Sevilla, is in no doubt as to his team-mate's quality and influence on the team.

"He's a great player. He's been very consistent in recent seasons and it's fantastic to have him back," said the Welshman.

"His experience is going to serve us all out on the field because he's capable of leading the match really well. It's fantastic that he's returned."