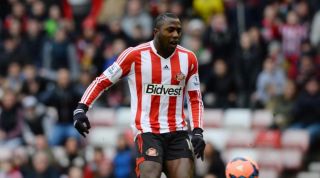 The United States international came on as a late substitute as Sunderland drew 2-2 with West Brom in the Premier League on Saturday, his first outing since injuring a hamstring at the World Cup.

Altidore is some way behind fellow strikers Steven Fletcher and Connor Wickham in terms of fitness, but Poyet is pleased with his attacking options.

"The idea is always to have options," he told the Sunderland Echo.

"We talk about Fletch and Connor, but I can say that I've never seen Jozy as happy as now.

"I've got no explanation for that.

"But he looks really happy and knows everything that is going to happen and why.

"I think last year, unfortunately for all of us, there were too many doubts because of the way we started.

"He knows the importance of maybe the last half-hour for us. Hopefully then we'll see the Jozy of the last five games [of last season].

"That's great for us. He knows his role in the team for the next month."

Sunderland host Manchester United in the Premier League on Sunday.