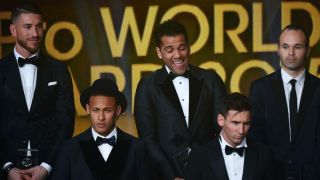 Dani Alves feels Neymar deserved better than third place in the race for the Ballon d'Or and should have finished ahead of Cristiano Ronaldo and behind winner Lionel Messi.

The Brazil international got just 7.86 per cent of the votes against Cristiano Ronaldo's 27.76 per cent - with Messi amassing 41.33 per cent - but Alves nonetheless felt his compatriot deserved second place on the podium.

"Neymar has gone through an incredible evolution and he’s a better player every day," Alves told reporters.

"It surprised me that he did not finish second, but they cry when I say these things and speak my mind.

"When Leo stops winning it, it'll be Neymar. He'll keep competing for the award, he wants it and will work to win it."

However, Alves believes Neymar will have to be patient before getting a shot at the prestigious award due to Messi's dominance.

"Messi is going to keep winning the award for as long as he wants," he added.

"If he keeps going like he is now he won't have any competition.

"The years pass and he just gets better. We’re privileged to have him with us."