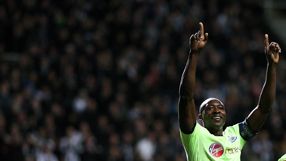 Newcastle surprised even themselves by finishing fifth last term to secure a Europa League berth but after making few new signings and suffering injuries to key players they sit 15th, two points above relegation.

A third successive league defeat on Wednesday at home to Everton was not what they needed but Ameobi was not too concerned with the prospect of reinforcements arriving in the January transfer window.

"We've got a small squad and we're at our bare bones at the moment," Ameobi, who came up through Newcastle's youth academy in the 1990s having moved from Nigeria aged five and made his debut in 2000, told the club's website.

"That's not an excuse for anything that's gone on before because we've got players to play every game but over this period we've really been stretched.

"Hopefully the new signings will come in to give us that bit of urgency and everything that we've got to do and hopefully that can give us a lift."

France international full-back Mathieu Debuchy was spotted in the stands at St James' Park in Wednesday's 2-1 defeat by Everton and is being lined up for a move.

Debuchy's France team-mates Yohan Cabaye and Hatem Ben Arfa, influential in midfield for Newcastle last season, have been out with injury as well as defender Steven Taylor and livewire winger Jonas Gutierrez.

"We've got a few injuries coming back as well - we've got big, big players out so hopefully they could be coming back in the next few weeks and really help us kick on," said Ameobi.

Top-scorer Demba Ba was left out of the side with a transfer to Chelsea imminent and the Senegalese player's departure would be a big loss for Newcastle.

"It's not a bad thing because all the uncertainty of whether he was going to stay is now done," manager Alan Pardew said.

Ameobi has been told by Pardew to turn down requests from Nigeria to play at the January 19-February 10 Africa Cup of Nations, prompting angry responses from national coach Stephen Keshi.

However, the 31-year-old Ameobi is delighted to get his chance to shine in the top flight.

"I love it. It's something that I want to do every week and unfortunately I haven't had a chance to do that but if I can get a run of games going I know my game and I know I can bring it to the party."

Newcastle have a tricky FA Cup Third Round clash at Championship Brighton and Hove Albion on Saturday before resuming their battle against relegation on January 12 against Norwich City.