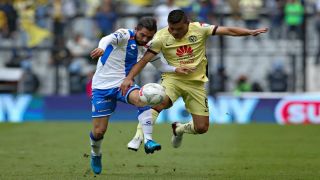 Club America is the champion of CONCACAF, was a semifinalist in the previous tournament and has won more titles than any other Mexican team.

So when Las Aguilas started the season with a 0-0 draw against Puebla in the Estadio Azteca, the reaction was harsh. "They didn't lose because of a miracle," was Record's headline. Esto labeled America's start, along with fellow capital clubs Pumas and Cruz Azul, a nightmare.

There's extra pressure both inside and out on manager Nacho Ambriz and his charges this season. It's the 100th year of existence for America, and the club is celebrating with special logos and events (and apparently a price hike in concessions and tickets, much to fans' dismay).

Though it seems like a somewhat arbitrary goal, Pachuca and Chivas both celebrated 100 years with a title. Ambriz deflected when asked about pressure after the match.

"The pressure has been here since I arrived. I'm not disconnected to what you're thinking — this team needs immediate results," Ambriz said. "Today we got a point, although that doesn't count for much here. You have to win. We're required to play better to be in the top spots."

The miracle that kept America in the match was goalkeeper Moises Munoz. The goalkeeper had been criticized this winter after contributing to America's collapse at the Club World Cup but made six saves to keep his clean sheet and send Puebla home with just a draw Saturday.

The goalkeeper was called into action early and often as Pablo Marini's men pressured the right side of America's defense. It wasn't exactly a stroke of genius from Marini to target Ventura Alvarado and Erik Pimentel, both of whom were filling in for regulars. Right back Paul Aguilar was missing with an injury, while center back Paolo Goltz served a suspension.

Those players will be back, and Munoz won't be called into action quite as often. Ambriz's winter signings Brian Lozano, who after his substitute appearance said he struggled playing in Mexico City's altitude for the first time, and William da Silva will integrate into the squad.

America is a confident club whose fans thrive off telling rivals to "hate them more" because of the success they've had. That includes a record 12 league titles. Getting another in either this tournament or the next and becoming the third club to do so in the 100th year won't happen if America plays like it did Saturday.

But it's too early to write off America. We've seen one match, 90 minutes. The defense will sort itself out. The attack, which should be high-powered thanks to three of Liga MX's highest-paid attackers, is a bigger concern. Rubens Sambueza also was serving a suspension, and his return will be a boost. Oribe Peralta, Darwin Quintero and Dario Benedetto had an off-match in round one. If it continues, it might cost Ambriz his job.

All scores from Round One