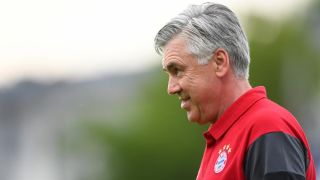 Bayern Munich coach Carlo Ancelotti has no plans to sign a replacement for Mario Gotze, insisting he is happy with his squad.

Gotze returned to Borussia Dortmund in a deal worth a reported €26million after the Germany international spent three seasons in Munich.

Bayern have added Renato Sanches and Mats Hummels to their squad in the off-season and Ancelotti insists there is no need for further strengthening.

"I think we are covered in all the positions," he told a news conference on Tuesday.

Bayern star Robert Lewandowski was linked with a move away, with Real Madrid reportedly interested in the striker.

However, Ancelotti has said he is unwilling to let the 27-year-old go and he reiterated his stance in Chicago.

"I have seen him play a lot of times," he said.

"Last year he scored a lot of goals, he's a fantastic striker, we need these players so we are really happy to have him here so there are not other things to say.

"He's really important for us. He's not the only player, fortunately. I think we have a fantastic squad and we will be competitive all season."

A player Ancelotti is set to regain from injury is Holger Badstuber, who is on track to return from a broken ankle and could feature against AC Milan in the International Champions Cup on Wednesday.

"Badstuber is doing well after the injury that he had. It's not a surprise because I knew Badstuber was a professional player," Ancelotti said.

"Of course he needs to improve his condition, but I think the injury is gone. Tomorrow I think he can start, maybe not all the time, but 30-40 minutes he can play."