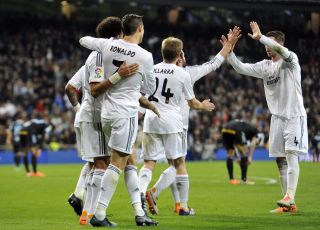 While Real remained within five points of Barcelona and Atletico Madrid at the top of La Liga, they were not at their fluent best at the Santiago Bernabeu in their first game of 2014.

Karim Benzema eventually put the hosts ahead with 67 minutes gone before a Cristiano Ronaldo double late on made the scoreline appear more emphatic than the showing deserved.

However, Ancelotti believes his side simply lacked a spark in their first game back since the winter break, which marked the return of Gareth Bale from a calf injury.

"We didn't play very well, we were a bit slow in the first half but it is normal coming back from the holidays," he said.

"The team did not have an intense rhythm.

"The most important thing was to win the game, and we did that in the second half with more intensity."

Ancelotti also confirmed he did not see an alleged gesture by Angel di Maria after he reportedly received criticism from the home fans following his substitution in the second half.

"Di Maria tried to do his best but it is normal that some people are not happy with his performance," he explained.

"I did not see any gesture. It could be it is an error to respond to the fans."

Explaining Xabi Alonso's withdrawal at half-time, Ancelotti revealed that the midfielder "felt a bit uncomfortable" because of a burst eardrum sustained in the 3-2 win over Valencia in December.