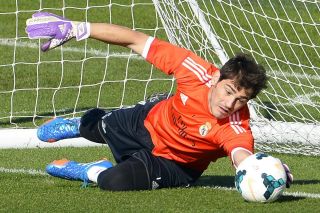 The 32-year-old has featured just twice for Real since suffering a fractured hand in January, having been usurped by Diego Lopez, who was initially signed from Sevilla as cover.

But with transfer speculation surrounding the Real and Spain captain mounting, Ancelotti believes there is still a place for Casillas in his squad.

"I haven't talked to him about leaving," the Italian said.

"He's a great keeper and a great professional.

"Even if he doesn't play he helps the team, he's a true captain.

"I hope he stays because he's good for the atmosphere. I need to talk to him because it's only fair, but he looks happy to me and he's been very professional."

Casillas recently revealed his extended absence from the Real first team was giving him food for thought regarding his future, with the FIFA World Cup looming at the end of the season.

"Of course I want to stay here, winning more titles with Real Madrid," he said.

"I have been here since I was a small boy but the day will come when maybe a decision will have to be made.

"I have decided I want to be part of this squad for a long time but if the situation doesn't change in three months and you ask me the same question perhaps I will answer that I am planning to leave."

Casillas has spent his entire career at Real, making more than 600 appearances for the club in all competitions.