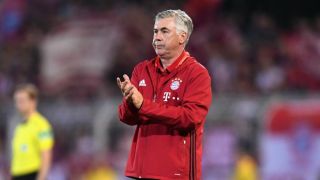 Bayern Munich coach Carlo Ancelotti was delighted with his side's performance as they thrashed Carl Zeiss Jena 5-0 in the DFB-Pokal on Friday.

Robert Lewandowski netted a first-half hat-trick to lead his side the way, before Arturo Vidal and Mats Hummels made it five after the interval.

It was a second competitive victory for Ancelotti since replacing Pep Guardiola – having beaten Borussia Dortmund 2-0 in the DFL-Supercup on Sunday – and the Italian was happy with another triumph.

"Our performance and our attitude were both good," Ancelotti told reporters.

"We scored an early goal and were in full control. We are very happy with that."

Ancelotti left Hummels out of his starting XI – before introducing him from the bench after 51 minutes - and he was quick to stress that the Germany international was rested rather than dropped.

"I decided to rest Mats," he added.

"He already played 90 minutes against Dortmund. Javi Martinez did a good job at the back."

Lewandowski put in a man-of-the-match performance and the Poland international was over the moon with his first hat-trick of the season.

"It is not important whether it is a Bundesliga or a DFB-Pokal game," he said.

"The people always expect goals from me and I always want to score.

"It was important for us to put in a good display here. But there is still room for improvement."