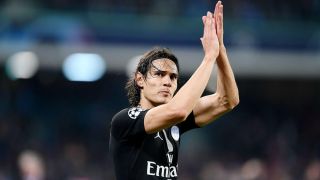 Napoli coach Carlo Ancelotti made no secret of his desire to coach Paris Saint-Germain striker Edinson Cavani amid reports linking the Uruguayan with a return to Stadio San Paolo.

Cavani enjoyed three of his best seasons at Napoli, netting 78 Serie A goals to establish himself as one of Europe's most feared marksmen, ultimately earning a reported €64million switch to PSG in 2013.

Although 19 league goals was the most he managed in a single season during his first three years in France, Cavani stepped things up a notch in 2016-17 with 35 strikes and he has been similarly lethal ever since.

But, amid suggestions of a fractious relationship with Neymar, speculation has hinted Cavani could be allowed to leave.

Media reports indicate Napoli as being among the clubs monitoring the situation, and Ancelotti has done little to calm such stories.

"I have trained many champions, but not yet him," Ancelotti told Radio Kiss Kiss. "Would I like to? I like to train good players, he is very much [a good player].

Congratulations to on making the for his hat-trick against Monaco!  November 16, 2018

"I played against Diego Maradona and I would have liked to coach him as well. He was one of the most difficult to play against, but also the fairest, because at times we'd need to use rough tactics to stop him, yet he never complained."

Napoli pushed Juventus all the way in the Serie A title race last season and, although they are second to the Bianconeri after 12 matches this time around, Ancelotti's side are six points behind.

Nevertheless, Ancelotti is convinced the title is not beyond Napoli.

"The title is a dream, but not utopia," he added. "Utopia is beyond reach.

"But this is not the time to be making predictions. There's going to be a fundamental run of games coming up – we must be ready in Serie A and the Champions League. Getting through that group would be particularly satisfying."