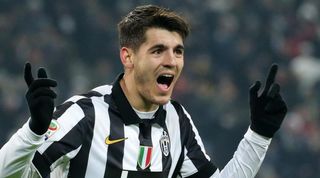 Striker Morata swapped Madrid for Turin for a reported €20 million during the close-season, although Real retained the option to buy him back in future.

Morata has scored six goals in 19 league appearances since arriving at Juve, and was on target against Borussia Dortmund this week in the UEFA Champions League, but Ancelotti does not foresee a situation where Real would exercise their right to return him to the Santiago Bernabeu.

"Alvaro needed to play," he told Gazzetta dello Sport. "He is a young guy and he was looking to go somewhere he could find opportunities and consistency.

"He had a lot of offers, but he was the one who chose Juventus.

"Last year with me, even though he did not play much, he did well.

"He is a modern striker - he can run, has pace and intensity, is cool in front of goal and is a hard worker.

"But we have no regrets. His departure was a well-considered decision.

"In Morata's contract there is a right of redemption for Real, but I think he will stay at Juve."