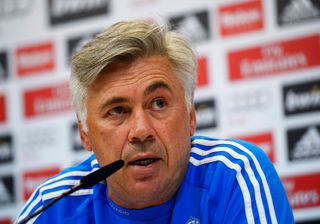 The Italian joined the Spanish giants in the close-season from Paris Saint-Germain, where he won his third domestic title as a coach following earlier successes at Milan and Chelsea.

Aged just 54, Ancelotti has been widely linked to either taking the reins at Roma - where he spent eight years as a player - or the Italy national team when he leaves the Bernabeu.

However, the former Juventus boss has indicated that Real may be his final job before retirement.

"A lot of people have asked me about the possibility of coaching Roma or the national team in the future," Ancelotti told Sky Sport Italia.

"I don't know, I could even decide to retire after my experience at Real Madrid."

Ancelotti has endured a testing start to life at the Bernabeu, with his side already five points adrift of champions Barcelona and local rivals Atletico Madrid in the Liga table after eight games.