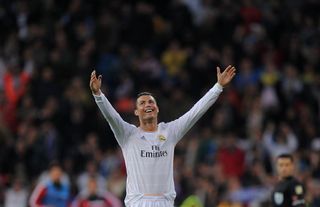 Ronaldo was the only one of the three to start Saturday's 4-0 rout of strugglers Osasuna in La Liga at the Bernabeu.

The Portugal forward had stated he was in "perfect condition" before the game after recovering from knee and thigh injuries, and proved it with a sparkling show in which he grabbed a brace before Sergio Ramos and Dani Carvajal were also on the scoresheet.

However, missing from the line-up was world-record signing Bale, the forward still feeling the effects of illness, while striker Benzema was only named on the bench as he is nursing a slight hamstring problem.

"Ronaldo, Bale and Benzema will play on Tuesday," the Italian said. "The sooner we score, the better.

"Cristiano is fit. He had more confidence and is totally fit now.

"Bale felt weak and we preferred that he trains individually today (Saturday). He will be ready on Tuesday.

"Benzema is improving, he will train tomorrow and should be ready on Tuesday."

The 21-year-old has been linked with a move away from the club, with Serie A outfit Inter and Premier League side Arsenal among those reportedly interested.

But Ancelotti is hopeful the young strike will remain in Madrid.

He added: "Morata worked hard but it wasn't easy for him to go through Osasuna's defence,

"Morata is important for us and we need him with Benzema."