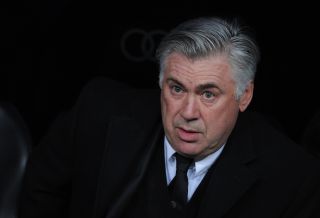 Madrid struggled to create chances during the first half on Saturday and found opposition goalkeeper Ricardo in good form when they did.

However, the Bernabeu hosts improved after the break, with goals from Cristiano Ronaldo and Karim Benzema securing a victory that takes Real two points ahead of Barcelona and Atletico Madrid, who each play on Sunday.

"We didn't recover possession well in the first half," said Ancelotti. "We improved in the second half and it was easier to attack.

"The most important thing is the balance we have at the moment; it's the key. We defend and attack very well.

"We are calmer now. We will continue to fight & keep the intensity high. Everyone is doing their best."

Ancelotti is also confident Gareth Bale will be fit for Real's Copa Del Rey second-leg clash with Espanyol on Tuesday, despite the Wales international being replaced at half-time following a strong tackle.

"Bale didn't feel comfortable after the knock he received and that's why I took him off," added Ancelotti.

"He's not injured and should be fit to play in the next match."