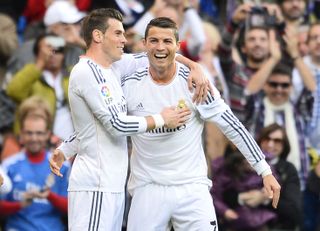 Ronaldo – who has scored 25 goals in 18 appearances for Real this season – has not featured since injuring his thigh against Almeria almost a fortnight ago.

The Portuguese attacker is suspended for Saturday's Copa del Rey trip to third-tier Olimpic de Xativa but Ancelotti revealed he is training and a return date is in sight.

Ancelotti will also rest Xabi Alonso due to the surface, but claims he will pick a strong team despite their likely progression.

"Cristiano is fine. He trained well and will play (in the UEFA Champions League) on Tuesday," Ancelotti said on Friday.

"Xabi Alonso won't play tomorrow because playing on an artificial pitch is not good for his injury.

"We have trained well this week. We have no problems to use a strong side tomorrow."

Alonso's future has been the subject of much discussion recently, and Ancelotti is composed about his decision, saying: "Xabi Alonso will decide his own future. He is calm and I speak with him a lot."

Ancelotti spoke of his delight at the progress of Gareth Bale, who joined the club for a world-record fee of €100million and has impressed over the last month.

The Welshman has shone in the absence of Ronaldo, scoring five goals in the two-and-a-half matches since the latter limped off against Almeria.

"Bale is fitter and better than he was when he came," he added.

"He is very happy. Bale links up well with his team-mates. He is happy and everyone else is happy with him."

Ancelotti also lauded the club's young attackers ahead of Saturday's match, asking them to prove their worth on the road trip.

"I have faith in Jese (Rodriguez), (Alvaro) Morata and Casemiro but they are competing with Cristiano, Bale, Benzema and other players," he continued.