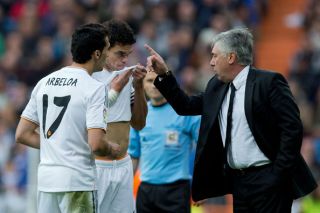 The record nine-time European champions have bowed out in the semi-finals of the competition in the past three seasons.

Ancelotti insists his side are not obsessed with trying to win the Champions League but said a club of Real's stature needed to at least make the final more often.

"The club hasn't spoken about what happened last year with (Jose) Mourinho and I haven't asked," the Italian told The Times.

"To reach the semi-finals of the Champions League is not bad. It's not good enough for some clubs but it's not bad.

"'La Decima' is not an obsession but it's a motivation. For the club it's very important.

Ancelotti spoke about the pressures of being at the helm at Real and said fans expected the team to win with style.

"The supporters here don't just look to win, they look at how you play," he said.

"At Real Madrid you have to win with style.

"For example, Fabio Capello was sacked after winning the league. Chelsea were a more physical team but here the technical skills of the players are the best."

Speaking about his time in charge at Chelsea, Ancelotti said he 'tried to kill' one of his players, who he refused to name.

The 54-year-old said it was a player with a 'well-documented history of misdemeanours'.

"We've never had any problems with the players, just one time at Chelsea," Ancelotti said.

"One player didn't show respect and I tried to kill him but it wasn't possible. The player is the property of the club and sometimes you cannot do what you want."