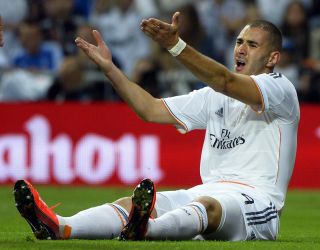 The France international has failed to find the net for the Liga club since scoring the winner against Granada in August.

Benzema's goal drought continued during Real's defeat against rivals Atletico Madrid at the Bernabeu on Saturday and manager Ancelotti is unsure whether he will begin Wednesday's home game against Stale Solbakken's side.

"I don't know if Karim starts tomorrow," the Italian said.

"Losing a derby is not a good thing, we have to react soon by playing well and winning."

Ancelotti went on explain he wants to see his side build on their 6-1 hammering of Galatasaray on matchday one when they take on the Danish outfit, who gained a creditable 1-1 home draw against Juventus in their Group B opener.

"It's a very important game tomorrow and we expect a good team attitude," he continued.

"We need to react quickly, both in results and in the game. I am sure that we will react well.

"(Copenhagen are) not doing well in their league, but against Juventus they did well and you have to be careful.

"It's a good opportunity to react. We are all together, when things go well and when it goes wrong."