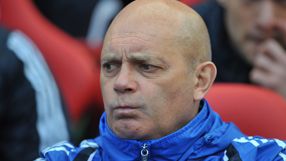 The Italian also announced that England midfielder Frank Lampard has suffered a setback in his bid to return to action for the Premier League leaders after a long injury absence and would be missing for another two or three weeks.

"The club made this decision (on Wilkins). I think it was a difficult decision for everyone but I have respect for this decision," Ancelotti told reporters ahead of Sunday's home game with Sunderland.

"I spoke with the players to tell them the club made the decision but... we have to move on and stay focused."

On Thursday, Chelsea made the surprise announcement that former England midfielder Wilkins, 54, had left Stamford Bridge with immediate effect.

No reason was given for the sudden departure of Ancelotti's right-hand man, who began his playing career at the club and was made captain at the tender age of 18.

Turning his attention to Lampard, Ancelotti said his vice-captain strained a groin muscle in training on Thursday.

"I think he will be out for two or three weeks," added the Chelsea manager. "We are very disappointed because he was very close to coming back.

"It is bad news especially at this moment when (fellow midfielder Michael) Essien is suspended."

Lampard has been out of action since August because of hernia surgery.