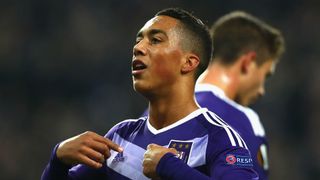 Anderlecht general director Herman Van Holsbeeck has confirmed Youri Tielemans is set to leave the club for Monaco and expects the deal to be done by the end of the week.

The 20-year-old is regarded as one of the biggest talents around and has also been linked with clubs such as Manchester United, Inter and Atletico Madrid in recent months.

"Youri Tielemans will be leaving Anderlecht. We will make an announcement about him in the upcoming week," Van Holsbeeck told VTM.

"There are still a few details that need ironed out, but Youri will normally leave the club before the end of the week.

"His move to Monaco is not 100 per cent done yet, but they are the club that has shown they are very eager to sign Youri."

Tielemans came through the ranks of the Anderlecht youth academy and made his first-team debut at the tender age of 16.

He has since developed into a key figure at the Brussels giants, making over 150 appearances in all competitions for the club.

The Belgium international scored 13 goals in 37 league appearances this term to help Anderlecht to the title.