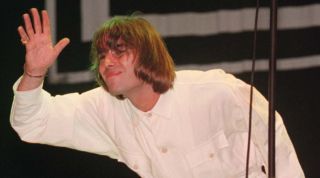 Southgate famously missed a penalty in the Euro 96 semi-finals against Germany which led to England's heartbreaking exit on home soil.

With the Three Lions set to face their old rivals once again on Wednesday, Southgate’s former Aston Villa team-mate Andy Townsend remembered back to the moment he was due to commiserate his pal for the miss.

But just as he was finding the words to say in the players' lounge, rent-a-gob Gallagher “appeared from nowhere” to provide Southgate with his own hard luck message before the grateful former Ireland international could begin.

When Gareth Southgate missed THAT penalty at Euro 96, one of the first people to console him that night was...@Oasis' Liam Gallagher ?!! pic.twitter.com/QIOQkwBe4e

According to Townsend, Gallagher told Southgate: “Don’t f***ing worry about it because at least you had the bollocks to go up and take it, those other f***ers, they didn’t want to f***ing know.”

“He literally said that, and I said [to Southgate]: ‘Actually, in as many words mate that was what I was going to tell you!’

“What he said was spot on. Good old Liam!”