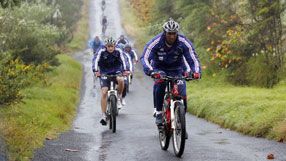 Anelka, who has started up front in the two warm-up games France have played so far, escaped unhurt after losing his balance on a slippery road and falling at the end of a 50-minute ride on the spectacular volcanic island.

In an effort to make his team bond, France coach Raymond Domenech has organised all sorts of group activities since the start of their preparations, including a hike up a glacier in the French Alps and a dune buggy race.

The coach's latest idea was a bike ride on Reunion, where the players landed on Tuesday from Tunisia.

Under ominous skies and a slight drizzle, the players rode up a steep, narrow road and down again, with Franck Ribery the fastest and Djibril Cisse the slowest.

Some 100 fans stood in the rain at the ride's starting point and cheered on the players, who waved and smiled but did not stop to sign autographs or talk to the media.

All the players participated except number two goalkeeper Steve Mandanda, who stayed at the hotel but had "nothing serious", according to a team spokesman.

After the ride, the team returned to their luxury hotel, overlooking a beach just outside St Pierre, the island's second largest city.

A more traditional training session is scheduled for Wednesday on Reunion, where France will play China on Friday in their last match before the June 11-July 11 finals in South Africa.

The former world and European champions have switched to a new 4-3-3 formation and Domenech has left forward Thierry Henry out of his starting line-up for their first two warm-up games, a 2-1 win over Costa Rica and a 1-1 draw in Tunisia.

France, whose popularity has reached a depressing low after their Euro 2008 flop and the uninspired performances that have followed, will face hosts South Africa, Mexico and Uruguay in Group A.