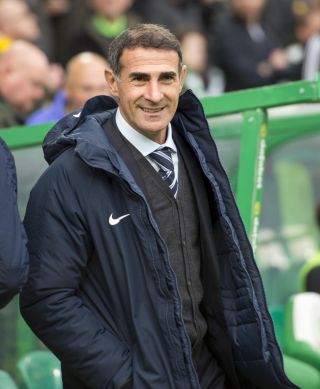 Kilmarnock boss Angelo Alessio is taking no notice of St Mirren’s travel sickness ahead of their Ladbrokes Premiership clash at Rugby Park on Saturday.

The Buddies picked up their first win in seven against St Johnstone last weekend to move up to ninth in the table.

Jim Goodwin’s side have lost all four away games in the league this season, but Killie’s Italian boss insists they will be a threat.

He said: “I have watched a lot of games and St Mirren play very well away. This is a tough game for us.

“St Mirren are difficult to play against, they are a good team with a good manager and we have to prepare well.

“We’ve worked hard this week and the focus is on Saturday.

“Every game is very tough. It is impossible to predict the result. Now is a good time for us but at the same time St Mirren are a good team, compact and solid.

“And they have good players and for this reason I say it will be a difficult game and to win we must play our best on Saturday.”

Killie have lost one of their last seven league games – to league leaders Celtic at Parkhead – and sit fifth in the table, one point behind Aberdeen.

Alessio is pleased with his side’s improvement after a poor start to the season but is looking to increase their goal tally of eight.

He said: “We have become good in defence, stronger in midfield and now we have to improve in attack.

“We have potential to improve.

“We added (Simeon) Jackson but we needed another striker after Osman Sow (injury). But I expect improvement about the team, not only the strikers, midfielders or defence.”