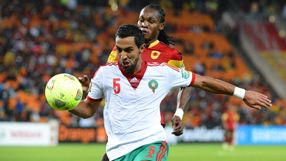 It was the second goalless stalemate on the opening day of the tournament after hosts South Africa and the Cape Verde Islands also failed to score, giving little indication of who might emerge from the section.

However, it might have been advantage Angola had they capitalised on a lively second period when substitute Guilherme Afonso and captain Manucho went agonisingly close.

Afonso, called up for the first time on the eve of the finals, reacted quickest when Morocco goalkeeper Nadir Lamyaghri dropped a cross but his effort went narrowly wide just minutes after he was brought on for the second half.

Manucho, who led the attack for Angola, had two late chances that also seemed easier to score than miss.

The first was a shot from a half-clearance by the Morocco defence midway through the half and the second a dramatic diving header at the end of the game. Both just missed the target.

The game had a bright start in contrast to the drab affair that preceded it with three good chances created in the first 10 minutes - the best falling to Morocco's Mounir El Hamdaoui.

Morocco, former Nations Cup winners and favoured to reach the quarter-finals, had a lively spell midway through the second half after bringing on Younes Belhanda, whose adductor injury in the build-up to the tournament saw him start on the bench.

But any hopes that he might prove a talismanic presence on the pitch quickly faded as Angola took control with a rousing finale as they launched wave after wave of attack.