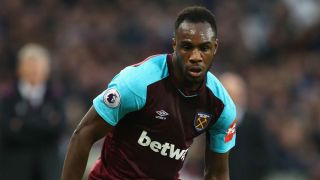 David Moyes said he left Michail Antonio out of his squad for West Ham's 1-1 draw against Crystal Palace because the midfielder missed a club meeting.

The 27-year-old recovered from a calf strain in time to feature in Tuesday's London derby, but Moyes opted to exclude him and said it was not the first time the former Nottingham Forest man had let him down.

Antonio last played for West Ham in their 3-2 home defeat against Newcastle United on December 23rd and his manager hopes he has learned his lesson after his latest indiscretion.

Moyes insisted the incident had been dealt with, telling reporters: "He wasn't involved for disciplinary reasons, because he missed a meeting this morning and it is not the first time.

"He apologised for it and we have moved on."

Christian Benteke put Palace ahead after 24 minutes but Mark Noble equalised from the penalty spot two minutes before half-time and Moyes was pleased to have seen his side hold firm thereafter.

"They have a really good front line," he said. "Benteke, [Wilfried] Zaha and [Andros] Townsend are all threats, but I thought we did well to deal with them."

The game fell on the eve of the January transfer deadline and Moyes indicated he still had hopes of bringing new players to the club.

"I would like to get myself a player in," he said. "But it is the right player, not just any player.

"We have been talked about with so many players. To answer every one, I think we would be top for the number of players linked."