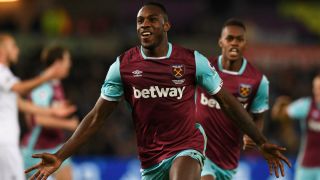 West Ham have announced that Michail Antonio has signed a new long-term contract with the club.

The winger, who is sidelined with a serious hamstring injury, has agreed to a new deal that will reportedly run until 2021.

"I'm over the moon, I've loved my time here and I'm just happy that we have managed to get things sorted so I can move onto next season and do what I've done this season," the 27-year-old told the club's official website.

"This year has been a better year than last year because I've played from start to finish and I managed to get the England call-up I've been dreaming of since I was a child. Hopefully I can keep pushing on and doing even better, because I always want to do better than I have done previously."

Antonio was named West Ham's player of the year this week following his largely strong performances for Slaven Bilic's struggling side.

He managed nine goals and five assists in all competitions before being sidelined last month.

Antonio, who joined the Hammers from Nottingham Forest in 2015 for a reported fee of £7million, won his first senior England call-up last August but did not make an appearance.

He was then included in Gareth Southgate's squad in March but was forced to withdraw due to injury.