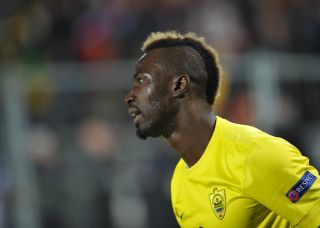 Traore, 23, moves to the Ligue 1 club on a four-and-a-half-year deal after just under 18 months with Anzhi.

The Ivory Coast international's departure from Gadzhi Gadzhiyev's side comes after a difficult season for the Russian Premier League club, which began with a fire-sale that saw the majority of their stars leave following billionaire Suleyman Kerimov's decision to withdraw much of his financial support back in August.

Anzhi sit bottom of the league after failing to win a league game so far this campaign, with Traore scoring just once in seven appearances.

However, the former Kuban Krasnodar and Cluj man will now look to resurrect his career with the French title challengers, although there have been reports that Traore is set to be loaned to West Ham from Monaco.

Claudio Ranieri's men resume their quest for the French title on January 10 when the principality side travel to struggling Montpellier.