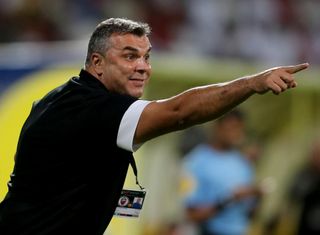 And the Gulf Super Cup and League Cup winners showed no signs of slowing down at the start of a new campaign on Tuesday.

Ismaeel Al Hamadi was on target before half-time and Shahin Abdulrahman's 49th-minute red card denied the home side a realistic chance of getting anything from the contest.

First-half efforts from Argentina duo Damian Diaz and Sebastian Tagliabue put Al Wahda in the ascendancy, and the rout was completed after the interval thanks to strikes from Mohamed Al Shehhi, Amer Omar and Adil Hermach.

Al Fujairah, who were also promoted last term, were beaten 1-0 by Emirates as Luiz Henrique netted a second-half winner.

Jorginho's tenure as Al Wasl coach started with a 2-2 draw against Al Dhafra on Monday.

The Brazilian's busy close-season initially looked to have paid dividends as his charges led 2-0, but old frailties returned to haunt them.

Having signed 14 new players, World Cup winner Jorginho will be looking to improve on the club's 12th-placed finish last term, and the early signs looked good as compatriots Neto Berola and Ederson marked their debuts with a goal each.

But Ahmed Sulaiman Ali Obaid and Billal El Najjarine grabbed a goal apiece in two second-half minutes to earn the visitors a point.

The match between Al Shabab and Ail Ain was postponed due to the latter's AFC Champions League commitments.