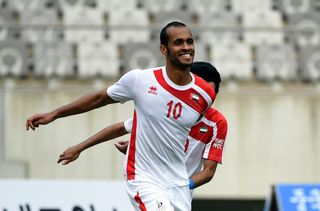 The season may only be five games old but Al Wahda have now won four of those matches, although they needed two goals in the final 10 minutes to secure their latest victory.

Carlos Villanueva gave Al Shabab the lead on 61 minutes after a goalless first half, the Chilean striking his third goal of the season.

With time running out the leaders responded in emphatic fashion, Salem Saleh levelling with 10 minutes to play and Adli Hermach sealing all three points in the 85th minute.

Al Jazira replace Al Shabab in second place after coming out on top in a seven-goal thriller with Al Ain, lit up by four goals from Mirko Vucinic.

The Montenegro international has now scored 10 in five matches since arriving at the club and began his latest goal glut in the ninth minute.

Al Ain, who were without Asamoah Gyan, battled back into the game, though, and moved ahead thanks to strikes from Mohamed Abdulrahman and Jires Kembo-Ekoko.

That was Vucinic's cue to take centre stage once again and he added his second of the match on 39 minutes after good work from Abdulla Mousa.

His hat-trick was completed on the hour from the penalty spot but Kembo-Ekoko popped up with his second to make it 3-3 with 26 minutes remaining.

Vucinic eventually secured the win for Al Jazira as he latched on to a Jonathan Pitroipa pass and fired beyond Khalid Essa.

Ivan Jovanovic's side sit a point behind third-placed Al Shabab and level with Al Ahli, who were held to a 1-1 draw by Al Fujairah.

That proved a popular scoreline on Sunday, with the match between Al Dhafra and Emirates plus Al Sharjah's home game against Bani Yas also ending 1-1.