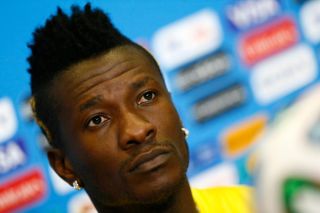 The Ghana striker's family issued a statement on Wednesday - the day of the match - to deny any involvement in the disappearance of rapper Castro and friend Janet Bandu.

Castro - real name Theophilus Tagoe - and Bandu are said to have gone missing while using jet skis during a holiday with Gyan's family at a resort in Ada, Ghana, in July.

No bodies were recovered following a search, prompting some media outlets to speculate over what might have happened to the pair, with some claims linking Gyan to an alleged "spiritual sacrifice".

But a statement read out by lawyer Kissi Agyabeng dismissed what it described as "absurd" and "ludicrous" allegations surrounding the 28-year-old.

And Gyan provided the assist for Mohamed Abdulrahman to open the scoring in the 36th minute.

Miroslav Stoch doubled the advantage by blasting into an open goal, and Gyan got his own name on the scoresheet 12 minutes after the break.

Mohammed Fawzi completed the scoring in the closing stages - Gyan again providing the assist - before Ajman had Haddaf Abdulla dismissed for a second bookable offence.

Al Wahda maintained their winning start to the season with a 2-1 win at Bani Yas.

Yousef Jaber put the home side in front after 12 minutes at Bani Yas Stadium, before Amer Omar and Adil Hermach hit back after half-time to send Al Wahda two clear at the summit, despite being reduced to 10 men in stoppage time.

Al Sharjah climbed off the foot of the table with a 4-2 win over Al Ittihad Kalba - their first three points of the season.