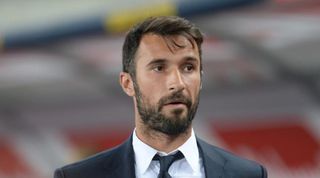 The visitors took a shock lead courtesy of Brazilian midfielder Crivellaro a minute before half-time, before Vucinic, the league's top scorer, popped up with two goals in eight minutes to take his league tally to 16 for the season.

A successful afternoon's work for Al Jazira was capped 19 minutes from time when Manuel Lanzini curled a corner straight into the net, ensuring the hosts preserved their 100 per cent record in 2015, while also condemning Ajman to a fifth straight defeat in all competitions.

Al Jazira are currently level on points with Al Ain at the top, with Zlatko Dalic's side beating fellow high-flyers Al Shabab 2-1 at the Hazza Bin Zayed Stadium.

The home side were ahead after just 16 minutes when Lee Myeong-ju latched on to Diaky Ibrahim's pass to slot home, but Nasser Masood levelled on the stroke of half-time with a superb individual effort.

A tight game was decided 15 minutes from time when Azizbek Haydarov saw red for handling in the area, with Jires Kembo-Ekoko making no mistake with the resulting penalty.

The result leaves Al Shabab two points adrift of the AFC Champions League places, after third-placed Al Wahda earned a 1-0 win away to bottom-of-the-table Al Ittihad, who are now eight points from safety.

Elsewhere at the bottom, Al Dhafra returned to winning ways with a 3-1 at home to 10-man Al Wasl, further easing their relegation concerns.

Al Dhafra are six points clear of the drop zone and level on points with Al Fujairah, who won 2-1 away to 10-man Emirates.

Al Nasr were held to a 0-0 draw at home to Bani Yas, while Al Ahli's Everton Ribeiro netted on his debut to give his side a 2-0 win over strugglers Al Sharjah, who had Rodriguinho sent off.