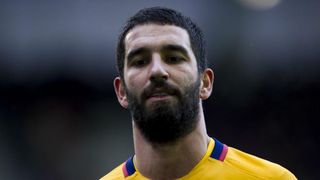 Arda Turan has aimed a cheeky dig at Arsenal by indicating he may have ended up at Emirates Stadium instead of Barcelona, had he not performed so well for Atletico Madrid.

The Turkey star moved to Camp Nou from Atletico last year, but had to wait until January to make his debut due to the FIFA-imposed ban on Barca registering new players.

Arda has struggled to establish himself in Luis Enrique's all-conquering first XI, with Barca remaining on course to retain the Champions League, La Liga and Copa del Rey titles they won last season.

However, the 29-year-old feels the opportunity to join Barca was just reward for his fine four-year spell at Atletico, suggesting that had his time at Vicente Calderon not been so productive, he might have signed for Arsenal.

"Honestly, I thought: 'If I play very well [I could] end up signing for Barca, because my style fits this team. If I [only] play well, I go to Arsenal," Arda told Catalan newspaper Diari Ara.

"For my style, with the ball, playing easy, short, aggressive when needed, I knew I could get here to Barcelona."

Arda will come up against his former club in the quarter-finals of the Champions League next week after Barca hammered Arsenal 5-1 on aggregate in the round of 16.