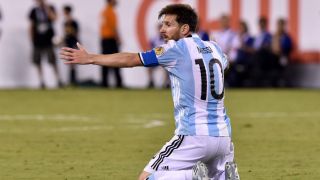 The Barcelona star announced he would no longer be available for selection for his country following the Copa America Centenario final defeat to Chile last month.

Supporters in Argentina championed a campaign to implore Messi to change his mind, while a number of current and former players - including Menotti - have said they expect the 29-year-old to go back on his decision.

And Menotti, who guided his country to World Cup glory in 1978, believes the team may not even qualify for the 2018 finals in Russia if Messi cannot be persuaded to return.

"There are only five teams going from South America and, without Lionel Messi, we run the risk of missing out," he told La Nacion. "Maybe we need to start preparing for Qatar in 2022."

Argentina are third in the qualifying table with 11 points from six matches, two points behind leaders Uruguay.