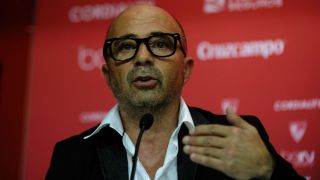 Monchi insists Sevilla have had no contact from Argentina over acquiring the services of head coach Jorge Sampaoli.

Sampaoli was appointed by the triple defending Europa League champions at the end of last month, signing a two-year deal following Unai Emery's departure to take over at Paris Saint-Germain.

The 56-year-old had success with Chile, leading them to Copa America glory on home soil last year, and speculation had begun to surface that the Argentina Football Association (AFA) could call on his services after the resignation of Gerardo Martino.

On Wednesday, Samapoli's lawyer Fernando Baredes claimed the AFA's bid to employ Sampaoli was hampered by Sevilla's reluctance to allow their man to take charge of his national team on a part-time basis, combining the role with his club duties.

Baredes also claimed budgetary constraints meant the AFA could not afford to buy Sampaoli out of his Sevilla contract, but sporting director Monchi responded by saying the club have received no contact from the national body.

"No one from the AFA has contacted us and asked," he said. "I know that the Argentina team is discussed every day there and this has caused a lot of commotion

"We are proud that our coach is the object of desire of the Argentina team. Beyond that, Sampaoli has a contract with Sevilla.

"And what I see every day and when I talk to him is that he is totally involved here. I haven't seen changes from day to day."