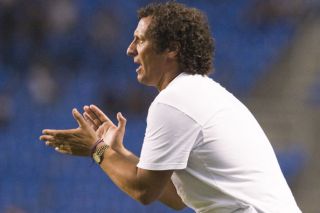 The home fans were delighted when Valazquez gave Belgrano an unexpected advantage after only six minutes.

Gimnasia failed to reply until after half-time when Rasic struck four minutes after the restart from Fernando Pereyra's assist.

The striker then set up Rasic for his brace in the 71st minute as Gimnasia kept their 100 per cent record alive.

Three points for Gimnasia have put them into second position in the standings behind Argentinos Juniors on goals scored but having played one game less.

Argentinos defeated Tigre 1-0 in front of their home fans thanks to Daniel Villalva's 77th-minute strike.

It was the fourth loss in a row for Racing, who had no answer to Rolle's 63rd and 88th minute goals.

Quilmes had a lead pegged back twice before finally seeing off San Lorenzo 3-2 at the Estadio Centenario.

Fernando Telechea and Luciano Abecasis put Quilmes into the lead on separate occasions but the efforts were cancelled out by San Lorenzo's Gonzalo Veron and Martin Cauteruccio.

It was left up to Quilmes substitute Arnaldo Gonzalez to score the winner in the 77th minute.

In other results, Guido Carrillo's double was crucial in Estudiantes' 2-0 win over Boca Juniors, Colon travelled to River Plate and emerged 2-1 victors, while Olimpia and All Boys fought out a 1-1 draw.

Rosario Central left it late as they triumphed 1-0 against Godoy Cruz, David Trezeguet scored as Newell's Old Boys won 2-0 at Atletico Rafaela and there was a goalless result between Velez Sarsfield and Lanus.