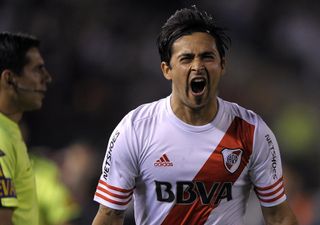 Leonardo Pisculichi and Ariel Rojas struck in the second half as River trumped Rafaela 2-1 in Argentine Primera Division action at Estadio Nuevo Monumental on Sunday.

Diego Montiel gave Rafaela a 13th-minute lead, when he fired the ball powerfully past River goalkeeper Marcelo Barovero from outside the area after a swift counter-attacking move.

River, however, hit back in the second half courtesy of Pisculichi and Rojas.

Pisculichi got the visitors back on level terms five minutes after the break via a perfectly-executed free-kick that curled into the corner of the net.

River are four points clear at the summit with 31 points from 13 matches, while Rafaela occupy eighth spot.

Lanus are hot on the heels of River following their hard-fought 1-0 win over South American champions San Lorenzo.

Lautaro Acosta's close-range strike in the 20th minute was all that separated second-placed Lanus and 2014 Copa Libertadores winners San Lorenzo.

The match was soured by a horrible injury to San Lorenzo midfielder Leandro Romagnoli, who was later told he had fractured his elbow in a nasty fall during the first half.

Lanus are in the midst of a nine-game unbeaten streak since losing to Velez Sarsfield at the end of August.

Independiente are one point behind Lanus after prevailing 3-1 at home to Tigre on Saturday.

In other results, 10-man Racing Club held on for a 1-1 draw with second-bottom Olimpo.

Boca Juniors are level with Racing on 23 points following their 2-0 win over Defensa y Justicia that was inspired by Juan Martinez's first-half brace.

Estudiantes edged 10-man Quilmes 1-0 and Velez were 1-0 winners over Banfield.