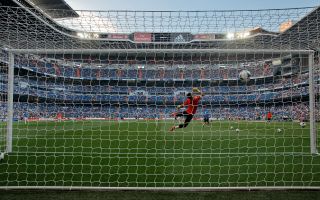 While Racing edged to the top of the table on goal difference, Torneo Inicial champions San Lorenzo started the new campaign with a 2-0 loss away to Olimpo, while Copa Sudamericana champions Lanus needed a sublime second-half finish from Ismael Blanco to draw 2-2 at Belgrano.

Racing got their season off to a flying start with a stunning opening goal of the season from Valentin Viola.

The 22-year-old striker unleashed a bicycle kick to send Diego Villar's cross past Colon goalkeeper German Montoya in the 38th minute on Saturday and Racing led 2-0 at half-time after Gabriel Hauche burst away in stoppage time to finish from a tight angle.

Racing capped off their three-goal victory in the 90th minute when Hauche cut the ball back to Luciano Vietto for a simple tap-in.

The Buenos Aires-based club lead the Primera Division with a goal difference of plus three ahead of Olimpo (plus two).

Argentinos Juniors, Estudiantes, River Plate and Rosario Central (all plus one) are also on three points, just behind Racing and Olimpo.

Olimpo triumphed on Friday thanks to second-half goals from Ezequiel Miralles and Ivan Furios as San Lorenzo began their Torneo Final campaign poorly.

In the final game of the round on Monday, Lanus led early but had to come from behind in the second half to earn a point at Belgrano's Estadio Mario Alberto Kempes.

Jorge Ortiz gave the visitors the lead in the 10th minute before an own goal from Paolo Goltz saw Belgrano equalise just after the half-hour mark.

The hosts hit the front in the 40th minute thanks to a penalty from Luciano Lollo but Lanus eventually claimed a draw when Blanco ran onto Victor Ayala's pass with 14 minutes remaining, before delicately chipping the ball over Juan Olave to make the score 2-2.

In other results, Velez Sarsfield were held to a 0-0 draw by Tigre, Atletico Rafaela came from behind to draw 1-1 with All Boys and last season's Torneo Final champions Newell's Old Boys played out a scoreless stalemate with Boca Juniors.