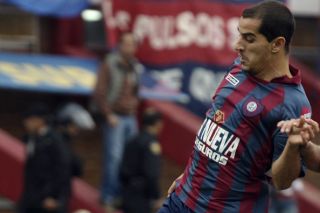 Correa netted a brace, while Hector Villalba also scored as San Lorenzo eased to a 3-0 win over All Boys on Saturday.

Newell's Old Boys were beaten 2-1 at Rosario Central in just their second league loss of the season to see their advantage at the top cut to three points.

At the Estadio Pedro Bidegain, San Lorenzo went ahead a minute before half-time thanks to Correa, who finished off Leandro Romagnoli's pass.

They needed until the final quarter-hour to seal the three points against lowly All Boys as Correa and Villalba struck, with the latter assisted by Nestor Ortigoza.

Newell's Old Boys were beaten for the first time since September 6 as Rosario Central claimed a surprise win.

Alejandro Donatti headed in the opener at the back post but the hosts were only able to hold onto their lead for four minutes.

Maxi Rodriguez brought down a pass in behind the defence before his shot was partially saved by Mauricio Caranta.

But the former Liverpool attacker followed up as the ball trickled into the post and tapped into an empty net on 16 minutes.

Hernan Encina restored Rosario Central's advantage on the half-hour mark when he tapped in at the back post and they held on to collect three points.

Third-placed Arsenal suffered a 2-1 loss at Tigre and Boca Juniors needed a stoppage-time penalty from Claudio Perez to draw 2-2 at Godoy Cruz.

At the other end of the table, Racing Club's horror start to the season continued with a 1-0 loss to Velez Sarsfield.

Atletico Rafaela were held to a 1-1 draw at Quilmes, Gimnasia La Plata and Olimpo played out an entertaining 2-2 draw and Argentinos Juniors won 1-0 at home to Estudiantes.