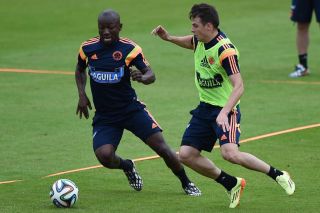 The South American nation have never gotten past the round of 16 in their four previous World Cup appearances and Arias wants Jose Pekerman's Colombia side to 'make history' this year.

After missing the past three World Cup finals, Colombia will finally return to football's biggest stage on Saturday when they will take on Group C opponent Greece in Belo Horizonte, and Pekerman's men are rated by many as an outside contender for the title.

While Colombia will be without star striker Radamel Falcao and will line up against an opponent in Greece that has more recent World Cup experience, Arias reckons it is time for him and his teammates to produce something special.

"Greece are a tough opponent," the 22-year-old right-back said at Colombia's training venue on Tuesday.

"We have to be focused on our lines to contribute. Colombia will come out to do their best, we've got to do a good World Cup.

"Being here is a dream come true, it is very rewarding to be part of this group...now we have to make history."

Colombia have not played at a World Cup since France 1998, while Greece qualified for the 2010 edition in South Africa, although that was only the Europeans' second time at the global tournament.

In the lead up to Brazil 2014, the main story regarding Colombia has been the withdrawals of Falcao, Aldo Leao Ramirez, Edwin Valencia and Luis Amaranto Perea due to injury, but goalkeeper David Ospina remains confident they have enough quality remaining in the squad.

"The coach in friendlies has been looking at several options that can be presented at the World Cup," Ospina said.

"There are many alternatives in the squad and we can all contribute, the coach shall make his decisions."