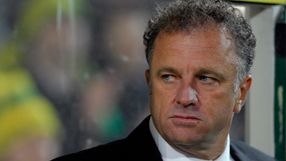 The A-League kicks off its eighth season this weekend with the competition enjoying its biggest fanfare in years with a trio of high-profile international signings.

Former World Cup winner and Juventus great Alessandro Del Piero makes his debut for Sydney FC away to Wellington, while former England striker Emile Heskey is likely to come off the Newcastle Jets bench at home against Adelaide.

Arnold, who coaches the A-League's Central Coast Mariners and has three overseas players on his roster, said the large numbers of foreigners were crowding out development opportunities for local players.

"You look at (this weekend) and if you take the Wellington team out of it, you're talking probably 90 field players on the field and probably 50-odd are foreigners," Arnold, who coached the Socceroos from 2006-07, told Australian Associated Press on Wednesday.

Clubs in the 10-team league are permitted a maximum of five foreign visa players, barring expansion side Western Sydney which is allowed six, and almost all have taken up their full quota.

"If (locals) are kept away from playing because some average foreign player plays in his position, that is definitely the wrong approach," Osieck told reporters on Wednesday.