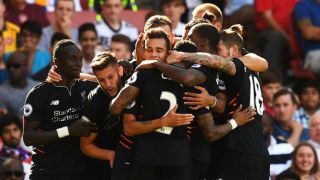 Liverpool were forced to hold off a resurgent Arsenal as Jurgen Klopp's men clung on to begin their 2016-17 Premier League season with an enthralling 4-3 victory at Emirates Stadium on Sunday.

In a remarkable encounter, Liverpool fell behind as Theo Walcott, who had missed a penalty a minute earlier, gave Arsenal a deserved lead.

But Philippe Coutinho - scorer of a stunning winner at Stoke City on the opening weekend of last season - repeated the feat with an unstoppable free-kick in first-half stoppage time.

Buoyed by that equaliser, Liverpool tore into their hosts after the break and scored three times in the first 18 minutes.

Adam Lallana put them ahead with a fine piece of control and a finish to match, before Coutinho doubled his tally by applying the finishing touch to Nathaniel Clyne's delivery.

Along with Ragnar Klavan and Georginio Wijnaldum, Sadio Mane was making his competitive Liverpool bow and the Senegalese marked the occasion with a sensational solo goal, finished off with a rasping drive into the top corner.

The home side did pull one back almost immediately through substitute Alex Oxlade-Chamberlain - another virtuoso effort to rival that of Mane - before Liverpool saw Coutinho hobble from the field.

With 15 minutes remaining, Calum Chambers' header set Liverpool nerves jangling further, but Klopp's men held on to get their campaign off to a victorious, if not altogether convincing, start.

Arsenal had the better of the opening exchanges and a sharp seventh-minute combination between Alexis Sanchez and Aaron Ramsey culminated in the latter prodding straight into the arms of goalkeeper Simon Mignolet.

The Gunners were ahead in the 31st minute, but only after Walcott had wasted a chance from the penalty spot.

Alberto Moreno's clumsy challenge inside the box brought down the England forward, who then saw his subsequent kick saved by Mignolet diving to his right.

But the respite was brief for Liverpool as Francis Coquelin won the ball back and, with Moreno caught upfield, Alex Iwobi played Walcott into the vacated space and his low strike was unerring in creeping inside the left-hand upright.

Arsenal debutant Rob Holding was adjudged to have fouled Coutinho, who sent a stunning 30-yard free-kick beyond Petr Cech into the top-left corner.

And the visitors picked up where they left off at the start of the second half.

Liverpool forged ahead when Coutinho fed Wijnaldum and his lofted pass across the area was chested down by Lallana, who thumped a convincing finish past Cech from a tight angle.

Seven minutes later, a period of patient possession ended in Clyne sending in a low cross for Coutinho to steer expertly home with his left foot.

Things got even better for Liverpool in the 63rd minute as Mane embarked on an ambitious run down the right before wriggling between Chambers and Nacho Monreal and firing high into the net with his left foot.

Oxlade-Chamberlain responded in kind, bursting past Clyne and Jordan Henderson before his shot took a deflection off Dejan Lovren and deceived Mignolet, and the deficit was back to one when Chambers glanced in Santi Cazorla's set-piece.

Arsene Wenger's introduction of new signing Granit Xhaka at 4-2 down failed to have much of an impact, and Liverpool withstood late pressure to edge an early contender for game of the season, sparking a chorus of boos around the Emirates.