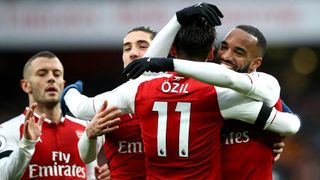 Arsenal shrugged off the impending departure of Alexis Sanchez by scoring four times in the first 22 minutes en route to a 4-1 hammering of Crystal Palace on Saturday.

The Chile international appears set to make the switch to Premier League rivals Manchester United, who are reportedly ready to pay £35million plus Henrikh Mkhitaryan for the forward's services.

For the second straight game, Arsene Wenger left Sanchez out of his matchday squad and the Frenchman seems poised for a pursuit of Pierre-Emerick Aubameyang as a replacement after Borussia Dortmund confirmed the Gunners had made a bid, thought to be in the region of €50m.

But whatever Arsenal's comings and goings before the end of the January window, they were certainly not short of firepower at Emirates Stadium as a sorry Palace were swept aside in a devastating opening.

Nacho Monreal capitalised on shambolic defending to score the first and then tee up the next two for Alex Iwobi and Laurent Koscielny before the returning Mesut Ozil, back after missing three games with a knee injury, played a key role in Alexandre Lacazette's marvellous fourth.

Luka Milivojevic's consolation came far too late to cause any Arsenal nerves and victory sees Wenger's men bring their five-match winless streak - since a 3-2 success at Palace in which Sanchez scored twice - to a resounding end and move within two points of fifth-placed Tottenham, who visit Southampton on Sunday.

Palace had enjoyed a resurgence under Roy Hodgson, losing only one of their past 12 Premier League outings, but they were comprehensively blown away as Arsenal moved out of sight inside the first quarter of the game.

The tone was set when Monreal stole in completely unmarked at the back post to head in Granit Xhaka's right-wing corner, and the lead was doubled before 10 minutes were up as the left-back turned provider, getting to the byline on the left before cutting back for Iwobi to steer home from close range.

Palace failed to learn their lessons, however, as another Xhaka set-piece was met at the far post by Monreal, whose ball across was bundled home by Koscielny inside the six-yard box.

The beleaguered Wayne Hennessey fumed at his defence as he picked the ball out of his net for the third time in 13 minutes, but neither he nor his backline could do anything about the glorious fourth.

Ozil exchanged passes with Jack Wilshere and upon receiving the return, flicked a sumptuous backheel into the path of Lacazette, who swept home first-time into the bottom-right corner.

Palace showed belated signs of life as Bakary Sako caused havoc among the Arsenal defence and shot straight at Petr Cech, who was at full stretch shortly before the break to keep out Wilfried Zaha's deflected effort.

Hennessey raced from his line to deny Iwobi at the end of a searing counter 11 minutes into the second period and Cech was similarly impressive in spreading himself to keep out Christian Benteke at the other end.

Iwobi's thumping drive was kept out by Hennessey at his near post as Arsenal sought a fifth but with the game long since sewn up, Wenger replaced Ozil with Premier League debutant Reiss Nelson as the match entered its closing stages.

Cech's wait for a 200th Premier League clean sheet went on, however, as Milivojevic spun and fired home from a corner late on with 12 minutes left, Benteke claiming the assist.

But that was the only sour note on an otherwise excellent outing for the Gunners ahead of their crucial EFL Cup semi-final date with Chelsea, while Palace's poor day at the office took another bad turn when Yohan Cabaye left the pitch on a stretcher in the final moments.