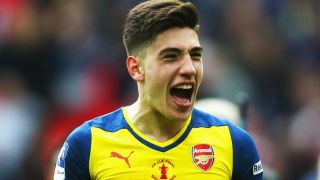 Hector Bellerin believes defending champions Arsenal have the quality and depth to go all the way in the FA Cup once again this season.

Arsenal have taken out the two most recent editions of the competition - beating Hull City in 2014 before making it back-to-back titles against Aston Villa last year.

Arsene Wenger's men qualified for the fourth round of this year's tournament after a 3-1 come-from-behind win against Sunderland at the Emirates on Saturday.

And Bellerin said it is the goal of the team to become the first club to win three finals in a row since Blackburn Rovers achieved the feat from 1884-86.

"That is the goal of the whole team," Bellerin told Arsenal Player.

"The legs are fine and we have shown that we have very good players on the bench also and the rotation helps us get good results.

"We have a lot of games and they are all hard games, but we have to respond in the way we did today and I'm sure we will be fine.

"The team was up to the challenge. We didn't rush the games and we knew we had to be patient. It is nice to get the three goals and that is confidence for the team as we had a difficult week ahead."