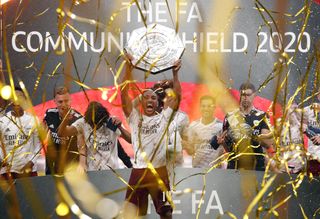 Arsenal captain Pierre-Emerick Aubameyang took no chances as he transported the Community Shield back to the Emirates Stadium.

The 31-year-old Gabon international, who dropped the FA Cup after scoring both goals in the Gunners’ 2-1 final victory over Chelsea earlier this month, ensured the club’s latest trophy did not suffer the same fate.

Aubameyang posted a video on his Instagram account showing the shield strapped safely into the seat next to him as it started its journey to its new home.

The striker had earlier given his side a 12th-minute lead at Wembley, only to see it cancelled out by Takumi Minamino with 17 minutes remaining as the game ended 1-1.

It was Aubameyang who converted the decisive spot-kick after Rhian Brewster had rattled the crossbar to clinch a 5-4 penalty shoot-out victory.