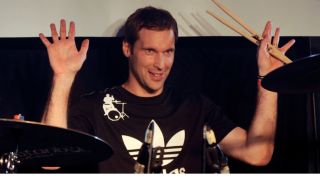 With his retirement just around the corner, Arsenal goalkeeper Petr Cech has been doing more with his time than simply keeping the Emirates bench warm.

The veteran Czech is set to hang up his gloves at the end of the season after a glittering career in which he’s won four Premier League titles, four FA Cups, the Champions League and the Europa League.

And the keen drummer is set to mark the occasion by releasing a charity single in collaboration with Queen legend Roger Taylor.

The 36-year-old will bring out a self-written song titled That’s Football next week, according to weekly gossip newsletter Popbitch.

Cech has reportedly enlisted the help of his friend and Queen co-founder Taylor for the single, five-and-half years after the pair appeared on BBC’s Football Focus together.

The track should be available for download next week and is, according to Popbitch: "Every bit as good as you'd expect a song written and performed by two drummers to be."

All the more reason to look forward to it, we say.

QUIZ! Can you name the 55 Europa League semi-finalists since 2000?