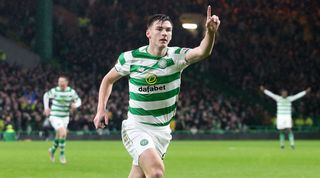 Celtic have so far rebuffed Arsenal's approaches for Tierney, with the main sticking point being money paid up front.

Arsenal are thought to have restructured their offer so that they would pay £20 million now and £5m in obligatory add-ons.

But, according to the Daily Mail, even if Arsenal get a deal over the line before the window slams shut on August 8, they will have to wait to see Tierney in action.

The 22-year-old underwent a hernia operation at the end of last season and is still recovering.

"We'll see how it is when things settle down because it's a very unsettling time for him at the minute.

"The injury has compounded that frustration because he's not 100 per cent right.

"He's still injured and he's rehabbing. He had a double hernia and he still has the Osteitis pubis problem so it's a slow burner that one."

The report speculates that the Scot could face up to eight weeks out.

But given his young age, Arsenal are thought to believe that Tierney's injury issues are nothing to be worried about long term.